Checkout what our client's have to say

Overland Tibet 2010 Trexmount Ventures has organized our 10 days Tibet tour to Everest Base Camp from the Tibet side, Driving through. We a team of 19 Volunteers from Habitat for Humanity built two houses in Itahari, a region in Southeast Nepal. After being Volunteers from Habitat for Humanity, we split into two teams for our rest and recreation which was organized by Hari of Trexmount Ventures. One team headed for Pokhara and trekked to Annapurna Base Camp, with their porters and guide. This was a first-time trek for all these ladies and they had a wonderful time with awesome views of mountains and villages. The other team took a flight out of Kathmandu for Lhasa in Tibet. They hired three 4x4s and drove back to Nepal over 9 days. They visited the Potala, the home to the Dalai Lama before he fled to India in the late 50s, and drove to Everest Base Camp. Unlike EBC on the Nepalese side, it is possible to drive to EBC on the Tibetan side. Cheating?? All this was arranged by Hari and his team. We all met back in Kathmandu after our adventures to exchange our stories. Many thanks to Hari Sitaula at Trexmount Ventures who went beyond our expectation on our holiday trip. From the HFH (Habitat for Humanity) Global Village team, 2010, from New Zealand. 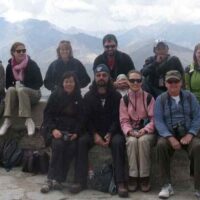 We had a dream to reach Mt Everest Base Camp since we heard about this. One of my friends recommended Trexmount so we have decided to use them for arranging our trek to Everest Base... ...

Namaste Hari and all at Trexmount Ventures, We have just completed our third visit and a Fantastic trek in Nepal with a four-day trek in the Annapurna area and an 18-day trek to Everest... ...

We set off to follow the footsteps of Edmund Hillary and did Everest base Camp Trekking in October 2006 with Trexmount Ventures. There were so many highlights in the journey however... ...